The Caduceus vs. The Rod of Asclepius 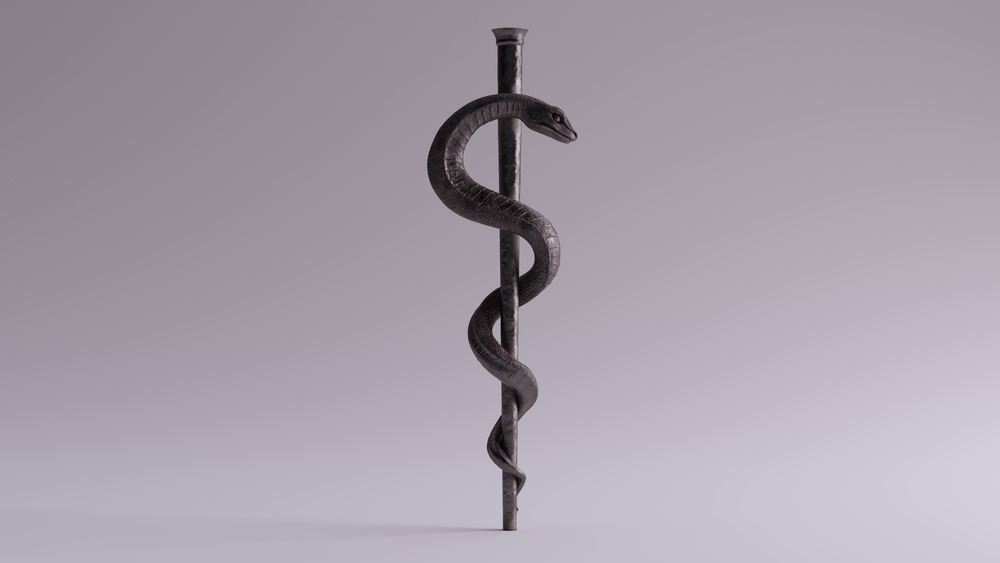 The Caduceus vs. The Rod of Asclepius

So as I ventured forth to create my logo or symbol for my practice, I came across a question.  Well actually, I didn’t, Andrew Perkins, my I.T. Webmaster guy brought up a question.

My go-to symbol for medicine has always been The Caduceus.

Andrew understood what I wanted to create, and actually researched a little.  He emailed me back, Hey! You may want to consider this image. The Rod of Asclepius

As it turns out, both symbols have roots in Greek Mythology, but they are not interchangeable as many have assumed. Only one of them is historically accurate as a representation of medicine.

The Caduceus (two snakes wound around a staff and often bearing wings) belonged to Hermes, the Greek messenger of the Gods.

How Hermes obtained it is a subject of debate – some sources claim that Apollo gave it to him as a sign of friendship, while others claim it came from a man who made it his mission in life to stop snakes from reproducing by hitting them with a stick.

Hermes (or Mercury as the Romans called him) was gifted with a wide variety of associations:

In the 16th century pharmacist, then called alchemists, used this symbol in the printed early medical texts as the “printer’s caduceus”.  This was also during the time when alchemists believed lead could be turned to gold and immortality could be created amongst varied compounds.

In 1902, the mistake was further cemented in North America when the US Army medical corps adopted the Caduceus at the insistence of a single officer. This widely viewed symbol was now associated with medicine, particularly in the States.

The Rod of Asclepius

The rod or staff of Asclepius is a single serpent encircling a staff, classically a rough-hewn knotty tree limb.

An ancient Greek physician who eventually was deified as the god of medicine is traditionally depicted as a bearded man wearing a robe that leaves his chest uncovered and holding a staff with his sacred single serpent coiled around it, symbolizing renewal of youth as the serpent casts off its skin.

The single serpent staff also appears on a Sumerian vase of c. 2000 B.C. representing the healing god Ningishzida, the prototype of the Greek Asclepius. However, there is a more practical origin postulated which makes sense.

Asclepius was most probably a skilled physician who practiced in Greece around 1200BC (and described in Homer’s Iliad). Eventually, through myth and legend, he came to be worshipped as Asclepius, the (Greek) God of Healing.

Asclepius is the God of Healing. He is the son of Apollo and the nymph, Coronis. While pregnant with Asclepius, Coronis secretly took a second, mortal lover. When Apollo found out, he sent Artemis to kill her. While burning on the funeral pyre, Apollo felt pity and rescued the unborn child from the corpse.

Asclepius was then taught medicine and healing by the wise centaur, Chiron, and became so skilled in it that he succeeded in bringing one of his patients back from the dead. Zeus felt that the immortality of the Gods was threatened and killed the healer with a thunderbolt. At Apollo’s request, Asclepius was placed among the stars as Ophiuchus, the serpent-bearer.

Asclepius had several daughters, including Hygieia (“Hygiene”), Iaso (“Medicine”), Aceso (“Healing”), Aglaea (“Healthy Glow”), and Panacea (“Universal Remedy”) The last daughter is also associated with the alchemists mentioned above and their caduceus.

The rod, a single snake wound around a staff, belonged to Asclepius, the Greek God of medicine and healing.

Consequently, Hippocrates was a worshipper of Asclepius, whose priests interpreted the dreams and visions of patients to prescribe appropriate therapy, kept non-venomous snakes in their shrines and clinics, and used sacred dogs to lick the wounds of sick petitioners.

The probable medical origin of the single serpent around a rod:

In ancient times infection by parasitic worms was common. The filarial worm Dracunculus medinensis aka “the fiery serpent”, aka “the dragon of Medina” aka “the guinea worm” crawled around the victim’s body, just under the skin. Physicians treated this infection by cutting a slit in the patient’s skin, just in front of the worm’s path. As the worm crawled out the cut, the physician carefully wound the pest around a stick until the entire animal had been removed. It is believed that because this type of infection was so common, physicians advertised their services by displaying a sign with the worm on a stick.